We will pick you up at your hotel.

We have lunch on Istiklal Street at a traditional restaurant, then we visit the Neve Shalom Synagogue and The Zulfaris Sinagogue - Kal Kadosh Galata.

At 9:15 AM after breakfast, we will pick you up at your hotel.

We'll drive to the Taksim Square area and walk approx. 2 km down Istiklal Avenue, along with local shops, shopping centers, banks, restaurants, bars..etc. We can stop and spend time anywhere you like.

Taksim is situated in the European part of Istanbul and, is a major shopping, tourist, and leisure district famed for its restaurants, shops, and hotels. It is regarded as the heart of modern Istanbul, with the central station of the Istanbul Metro network being located here. Taksim Square is also the location of the Cumhuriyet Anıtı (Monument of the Republic) which was crafted by the famous Italian sculptor Pietro Canonica and inaugurated in 1928. The monument commemorates the formation of the Republic of Turkey in 1923, following the Turkish War of Independence.

Galata Tower has dominated Beyoglu's skyline since 1348 and still offers the best panoramic views of the city. Originally named the Tower of Christ, it was the highpoint in the city walls of the Genoese colony called Galata. Most of the walls are long gone, but the great tower remains. Until the 1960s it was a fire lookout tower. Now the upper floors hold a restaurant and a panorama balcony.

Jewish Museum Housed in the ornate 19th-century Zullfaris synagogue near the Galata Bridge, this museum was established in 2001 to commemorate the 500th anniversary of the arrival of the Sephardic Jews in the Ottoman Empire. Its modest but extremely well-intentioned collection comprises photographs, papers, and objects that document the mostly harmonious coexistence between Jews and the Muslim majority in this country.

We have lunch on Istiklal Street at a traditional restaurant, then we visit the Neve Shalom Synagogue.

Neve Shalom Synagogue is called the "Oasis of Peace" or the "Valley of Peace," the Neve Shalom Synagogue is located on Büyük Hendek Street in the Galata Kuledibi district of Istanbul. Marsel Franko, a Jewish community leader, renovated the gym of the “First Coeducational Jewish School” to be used as a synagogue. It was opened during Rosh Hashanah (Jewish New Year) on September 26, 1938.

In 1949, all the necessary legal permissions were obtained, and the project’s development began. Among all the projects prepared for the synagogue’s construction, those of Elio Ventura and Bernard Motola, who had recently graduated from Istanbul Technical University, was accepted and the building was open for religious services on March 25, 1951.

The ceiling structure of the synagogue is a dome. The architectural calculations for the dome were made from Badin, a famous architecture, and its dome was crafted by Garbis Usta, a famous papier-maché master. The stained glass windows of the synagogue were drawn at the State Fine Arts Academy in Istanbul, and the special glasses used in the sanctuary were imported from England. The marble floor covering is made of onyx.

1671 - There is evidence that a synagogue existed in this place already in 1671.

1823 (25 Safer 1239) - The actual building was re-erected over its original foundations in the early 19th century. The synagogue named Kal Kadosh Galata is better known as Zulfaris which is a distortion from Zülf-ü Arus, the former name of the street, meaning bride's long lock of hair.

1882 - The marble frame surrounding the Ehal (Ark) was donated by Samuel Malki.

1890 - Repair work was carried out with the financial assistance of the Camondo family.

1904 (Nisan 5664) - Restoration work was conducted by the Jewish Community of Galata presided over by Jak Bey de Leon.

1979 - Assigned for worship for the Jews of Thracian origin.

1985 - Closed to religious services as there were no more Jews residing in the neighborhood.

1992 - The building was assigned (by its owner, Neve Shalom Foundation) to the 500. Yil Vakfi on the purpose to establish a museum.

2001 - With the financial backing of the Kamhi Family and the valuable contributions of Mr. Jak Kamhi and thanks to the vision and dedication of Mr. Naim Güleryüz, it has opened its doors as a Museum. 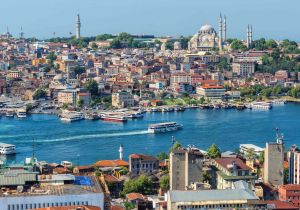