Bosphorus and continents tour is a private tour where you can explore the city's magnificent sights along with its blue waters. During your tour, you will be able to see many spectacular different architectural structures. You will have a lot to discover, including the mansions lining the shores of the Bosphorus, the castles, and the walls surrounding the old city.

Most of the Istanbul tours show the valuable places inside the old city. If you want to see the areas outside the old city, you should take advantage of the tours that take you to many points, including the Bosphorus. Byzantines and Ottomans produced architectural solutions to make this city splendid.

This full-day tour takes you to some of the city's most treasured landmarks. You can see the walls that have managed to protect the old city for many years. You reach the natural harbor carrying the Golden Horn. You can tour the Bosphorus, the most famous area of Istanbul, and watch all the magnificent structures on the coast.

● City Walls: The city walls are the ideal place to start seeing the most memorable parts of a city built in ancient times. Especially the Byzantines made a lot of effort to protect the city. The walls constructed and completed during the Eastern Roman period were added to the UNESCO World Heritage in 1985.

● Golden Horn: Its natural protective harbor made Istanbul an overvalued city in ancient times. Golden Horn has made extra contributions to the development of the city economically. In the modern period, it has many different touristic values.

● Spice Bazaar: It is very close to Grand Bazaar, one of the largest covered bazaars in the world. It takes its name from Egypt, as the revenues from the Egyptian province belonging to the Ottomans were used during its construction. Here you can find herbs, spices, teas, and more.

● Bosphorus: Istanbul has been home to one of the world's most important trade routes for many years. When you leave its strategic importance aside, you can see the structures you will encounter on the shore of the Bosphorus. Summer houses, palaces, and much more built during the Ottoman period have fabulous water views.

● Bosphorus Bridge: This bridge is the most critical in Istanbul and is only open to vehicles. Previously known as the Bosphorus Bridge, it is now called the 15 July Martyrs Bridge. The majority of Istanbulites refer to it as the First Bridge. It can be seen from Ortaköy and Beylerbeyi Palace.

● Beylerbeyi Palace: The most essential feature that distinguishes this palace from others is that it was built with neo-baroque architecture. It is a palace equipped with crystal chandeliers. It also has a large marble pool. It is a place that should be seen at least once by anyone interested in Ottoman architecture.

● Camlica Hill: It is a place that takes its name from the pine trees that adorned its slopes in old times. During the Ottoman period, it was used to raise hawks. In the modern era, it is one of the ideal places to spend time watching the fascinating view of Istanbul.

Continents and Bosphorus tour will allow you to step into every corner of Istanbul. There are many places to see on the European and Asian sides. These are not limited to iconic places like Hagia Sophia, Blue Mosque, or Dolmabahce Palace. You can see many locations if you have a tour guide who will offer you a live guide.

Thanks to this tour, you will have the opportunity to visit many places in Istanbul, not just the old city. A licensed and professional tour guide accompanies you throughout the tour. You will be picked up from your hotel before the tour starts and dropped off at the same place at the end of the tour. Entrance fees are covered for entry to key areas.

● All taxes and service charges (not including tips)

Pick-up info: Hotel pick-up at the start of the tour is valid in certain areas. Please contact us to learn more about the pick-up possibilities offered. At the same time, Beylerbeyi Palace is closed on Mondays and Thursdays. These days' reservations go to the Chora Museum.

Thanks to this city tour, you can reach the most important view of the city. You will set foot on all continents, including Europe and Asia. Also, you will tour the Bosphorus with a boat cruise, boat tours, or ferry ride options. One day you will visit various palaces, museums, bridges, mosques, and churches.

If you are curious about Ottoman architecture, you can learn a lot of different information that will surprise you. You will witness that Golden Horn and its surroundings, which were used as a natural harbor during the Byzantine period, have been transformed into a settlement. Thanks to this particular tour, you can have different memories.

Bosphorus and continents tour has a different structure from other tours. It allows you to see as many places as possible in one day. What you see will be the legacies of the Byzantines and Ottomans. To get the most out of the tour, you should pay attention to the information presented before you set off.

● Additional information may be requested from you for confirmation during the reservation process.

● The hotel details and contact information you provide while participating in the tour must be correct.

● If you want us to pick you up from a different location other than the designated hotel, you may have to pay an extra fee.

● Not all destinations are wheelchair accessible in this private tour.

● Beylerbeyi Palace is closed on Mondays and Tuesdays, and we go to Chora Museum.

Bosphorus and continents tour is an activity that will meet your needs. If you want to cancel your reservation and get a full refund, you must have completed the transactions at least 24 hours in advance. You can get more information about cancellation and refund by contacting Istanbul Travel Voyage.

Enjoy the historical sites of Istanbul with a full-day Bosphorus and Continents Tour. 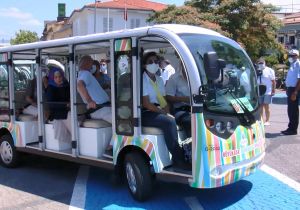